History of The Barn Church, Kew 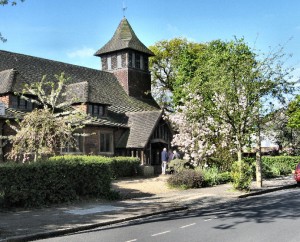 The Barn Church is historic. It was the first church in England to be built from a barn.

The timbers come from a 17th-century barn in Oxted, in the far corner of Surrey. The Oxted barn was L-shaped, and used at various times for cattle and the storage of hops and crops. When the timbers were dismantled and moved to Kew in 1929, they were numbered. (You can still see the numbers on the beams). They were then reassembled to create one long nave.

The timbers clearly predate the barn itself – they were probably from ships that fought at the time of the Armada – and the Tudor panelling behind the altar may be even older. The north and south entrances are paved with ancient threshing stones.

The barn was given to the Diocese of Southwark by the Lambert family, with major contributions from their Hoare relations, one of whom supplied 2-inch bricks of 17th-century style to match the timbers.

The new development of the west end for community purposes has had the enthusiastic support of the family who gave us the church, and their commitment to the education of children is illustrated in a striking panel in the old Lady Chapel.