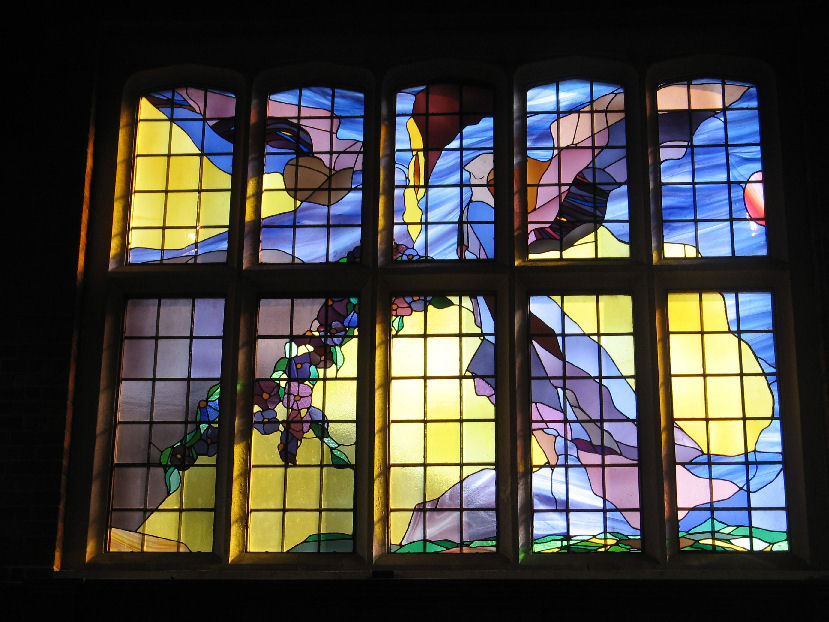 Today is St Valentine’s day. A day when messages of love are traditionally sent. Which is odd because St Valentine himself was the victim of a brutal murder, a martyr under the Roman Emperor Claudius. Quite how St Valentine’s death was made to metamorphose is, as they say, a ‘mystery’. But I have a story, a modern day story which I think, quite remarkably. combines the two – murder and love. It comes from an amazing book called ‘Tattoos on the heart’.  Hence you see its link with Valentine’s day. But it is not a book about cards and flowers but about gang culture.

The book was a bestseller in the US and won a couple of awards. The author is Father Gregory Boyle, a Jesuit priest who, for over 20 years has run a gang intervention programme in Los Angeles. LA has the dubious title of being ‘the gang capital of the world’. And the book is the story of his ministry, a ministry of compassion with some of the most frightening boys – and a few girls – who have walked this earth.

It is very American – and by that I mean that Brits like me have a bit of difficulty understanding the language. But there is no difficulty getting a picture of the lives of these gang members with their guns, drugs, prison sentences and tattoos. One of the most important ministries Father Boyle offers is laser treatment to remove tattoos – it is a sort of ritual cleansing for these youths before they can move onto to a different way of life. He also offers them work. He runs a flourishing silk screen industry which employs these young people giving them work – which they crave – and a new start in life.

As you might expect, there are lots of heart-warming stories of gang members who manage to change their ways. Which is great – that’s what we want to hear! But there are almost as many stories of these boys being gunned down. All that work, all those tattoos removed, all those honest wages at last earned, boys becoming parents determined to be better dads than their own fathers – and then, after all that, so many of them still end up dead. Not, please, because they have changed their ways but because someone from the past wont forgive them or simply because they were in the wrong place at the wrong time. Father Boyle has conducted hundreds, almost thousands, of funerals of young gang members. And so, in one chapter, he asks – what is success? Because his programme is dependent, like all such programmes, on funding. And funding these days is nearly always based on outcomes. Grant giving bodies want the programmes they fund to be successful.

But as Father Boyle knows, success and failure have little to do with living the gospel. What Jesus did was stand with the outcasts until they were welcomed or until he was crucified – whichever came first. Jesus defied all the categories on which the world insisted: categories like good and evil, success and failure, pure and impure, right wing and left wing. The right wing hated him aligning himself with outsiders – people you ought neither touch nor be near. And the left wing hated him when there was no revolution. The Left screamed ‘don’t just stand there, do something’ and the Right shouted ‘don’t stand with those awful people at all’. What Jesus did was stand in solidarity with the outcast – until he ended up being crucified for it. Father Boyle would be the first to say he prefers success stories to failure and decades of death. It is what Father Boyle calls ‘the slow work of God’.

In one sense the deaths and failures easily outweigh the successes but, for all its tragedies and sheer awfulness it is a book filled with humour, joy and generosity. You can see why the young outcasts of LA love him. They love him and he loves them. It is a story of unconditional love and, despite the chilling statistics, that’s what makes it a book, paradoxically, of hope.

The Father Boyles of this world are rare – we don’t love like he loves – and that fills us with shame. But it is the sort of shame that is not meant to diminish us but to challenge us so that we see what true humanity is capable of.

And taking a long, hard look at ourselves and our shortcomings is what Lent is all about. This is what the symbolic act of ashing on Ash Wednesday is all about. When mediaeval pilgrims started out on their journey they covered themselves with ash. It was a way of telling the world ‘I mean what I say’ – a bit like each member of Alcoholics Anonymous openly admitting to being an alcoholic. Ash Wednesday is about each one of us facing our sinfulness. It is a politically incorrect day that brooks no excuses, no plea of mitigating circumstances. And yet, despite all our failings, we hear God still calling us to be disciples.

Then, having acknowledged, faced up to, confessed that we are sinners, we have the rest of Lent to come to terms with our sin, but also with God’s mercy and forgiveness. Lent is a time to take stock, as we focus on discipleship in a world of suffering.

But everything will change. We don’t have to stay in the ghetto.

So perhaps a Lenten discipline could be to look for and respond to the glory of God revealed in other people – like Father Boyle. Because people like him help us realise not just how far we fall short but also the good human beings are capable of. Which gives us hope.

Let us pray to the God of glory, revealed to us in his Son, Jesus.

Father lengthen and deepen our attention span as we, your people, listen to your beloved Son, so that we do not fail to hear his will for us or share his longing for the world to be saved.

Dear Lord as we move into the season of Lent may your Church direct our reflections on the Glory of your Son as revealed on that mountain, and may we in turn look to lead others to Christ, your Beloved, that they may also listen and follow Him.

Father, with such humility you entered the world to save it through love’s giving power; increase our desire to enter into one another’s suffering and hardship, as we continue to battle with this Pandemic, helping us to share the world’s resources fairly with one another, and recognising all humanity as our brothers and sisters.

As our two churches move towards choosing a new vicar to lead us, give wisdom and loving understanding hearts and minds to those making those decisions, that they with prayer and the Holy Spirits guidance find the right person to both carry us forward and unite us more firmly as God’s family and living Church.

Father, let us not take one another for granted, but wake each morning ready to notice the Christ in each person we see and are able to speak to. Let us as parents, grandparents and teachers help to guide our children and teenagers through these both difficult and demanding times.

Let us also give reverence to your hidden presence and power in all creation, and treat your world with kindness and respect.

Lord Jesus, in our prayers may we stand alongside all who are too weak, or too confused; all those in hospitals, care homes or indeed their own homes who are suffering from Covid, or from lack of treatment because of it. May all who are suffering sense your love and comfort, and be given strength to persevere, and peace of mind and spirit.

and any others known personally to us. Lord in your mercy, hear our prayer.

Father, welcome into your kingdom of everlasting light all who have come to the point of death. Comfort those who miss their physical presence, and bring us all to spend eternity in your radiant presence.

Lord Jesus, thank you for providing always the encouragement and inspiration we need for the work you would have us do; give us the grace to trust your will for us and walk forward boldly in your company.

Merciful Father, accept these prayers for the sake of your Son, our Saviour Jesus Christ. Amen.